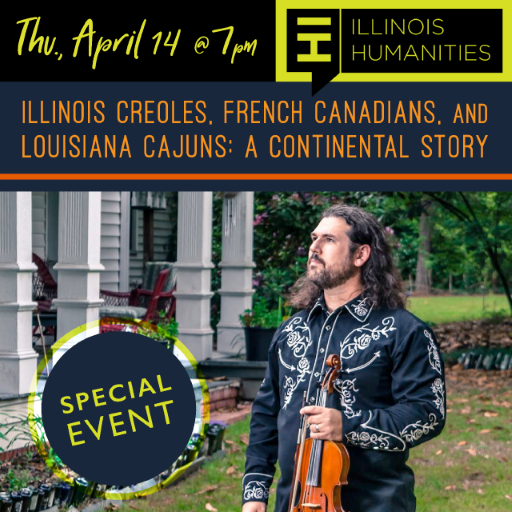 New France once stretched from the St. Lawrence River of Canada to New Orleans, and within its territory lived a vast population of French colonists almost as diverse as they were strong. With the coming of new borders and the formation of new countries like Canada and the United States, these French founders would find themselves divided and even isolated. But their cultures have remained, still existing after two centuries of isolation.

Musician and Illinois Road Scholar, Dennis Stroughmatt, will take us on a journey of discovery where we will hear the history of the French colonists arrival, the French dialects they still speak, and the unique music they still perform. Through story and song played on “Creole Fiddle,” we'll also learn how the French of “The Illinois Country” serve almost as a time capsule for their cousins to the north and south. With a “dash” of Cajun and a “pinch” of Quebecois this program will show how Illinois Creole culture bridges the continental expanse from Canada to Louisiana.

About the Presenter: Dennis Stroughmatt is from the Wabash River region of southeastern Illinois. He was taught to play fiddle by a mixture of tradition-bearing stylists including southeast Missouri French Creole fiddlers Roy Boyer and Charlie Pashia.

Illinois Humanities is supported in part by the National Endowment for the Humanities (NEH) and the Illinois General Assembly [through the Illinois Arts Council Agency (IACA)], as well as by contributions from individuals, foundations and corporations.

Any views, findings, conclusions, or recommendations expressed by speakers, program participants, or audiences do not necessarily reflect those of the NEH, Illinois Humanities, IACA, our partnering organizations, or our funders.

You must log in to register for this event.
Oops! - There was a problem in authenticating your card: